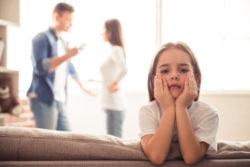 Any divorce can be messy, but throw children into the equation and it can be even more of a mess. There are many New Jersey laws that dictate what happens to children during divorce, especially in scenarios where the divorcing parents are arguing over the relocation of the children.

For the past two decades, the precedent has been that when it comes to relocating children, the child’s interests were considered, but the focus remained on whether the move would “cause harm” to the child.

Recently, a state Supreme Court ruling set a new standard when it comes to the relocation of children in divorce cases. The court ruled that divorced parents who want to leave New Jersey against the other parent’s wishes must prove that moving is in the child’s best interests.

The focus is now primarily on the child. The burden of proof to relocate will also be placed on the parent looking to relocate.

The case where the ruling was established involves a mother with primary custody of her daughters. She aimed to move her children out of New Jersey and to Utah, where she was marrying her new husband. According to the divorce settlement, a relocation stipulation was included that requires the written consent of the other parent before moving. The husband did not agree with his daughters moving to Utah but had no problem with the mother making the move alone.

Under the old premise, the mother only had to demonstrate there was a good-faith reason for the move and that it would not hurt the child’s interests. After that ruling, the mother moved to Utah with the girls, where they were enrolled in elementary school.

Later, the appellate court reversed the ruling and ordered a hearing. They required the lower court to apply “the best interests of the child standard” and after that decision, the mother and girls moved back to New Jersey. The trial court then ordered the parents of the girls to abide by the terms of the divorce agreement.

The recent change in the standard can make all the difference during future divorce proceedings including custody of children. If you are going through a divorce and believe problems might arise in regards to the children, then you should be sure to consult an experienced divorce lawyer like Lois Garber Schwartz, who handles all issues related to divorce and family law.

Contact the law office of Lois Garber Schwartz, Esq., today by calling 856-375-8989 or by filling out our online contact form and set up your free consultation.