Prenuptial Agreements and Coercion- What You Need to Know? 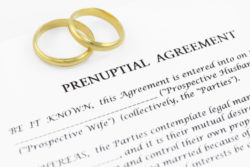 Did you know that if the prenuptial agreement is determined invalid, this could lead to further legal battles that you might not have anticipated in the event that you get divorced?

Putting together a prenuptial agreement is an important planning document that clarifies expectations and often serves to recognize assets that are being excluded from the marital estate.

Coerced prenuptial agreements, however, are not recognized in a court and can be held to be invalid. It is important to understand that it is beneficial for both parties to have their own legal representation when drafting and signing a prenuptial agreement, thereby making it less likely that a party will claim coercion when you are seeking to enforce the agreement.

The vast majority of prenuptial agreements have language in them that states that all parties entering into the agreement must do so being free of coercion, duress and undue influence.

A recent case in New York, however, illustrates the dangers of a coerced prenuptial agreement. If a judge determines that one party was coerced into signing a prenuptial agreement, then he or she may have grounds to argue that the document is legally invalid.

This would render the terms and stipulations of such an agreement invalid and could expose a great deal of property to equity distribution, as well as raise other legal issues. Prenups are typically very difficult to overturn in the state of New York. However, in a recent case of alleged coercion, the wife argued that her spouse coerced her signature by threatening to call off the wedding even though the bride’s father had already put down a significant deposit for their reception. According to the coercion claim, the bride also alleged that the groom said he would rip up the agreement once they had children.

The trial court set aside the prenuptial agreement by stating that the groom had fraudulently induced the bride to sign it.

Consulting with an experienced family law attorney is important when seeking a prenuptial agreement.

If you are in the process of a divorce and believe that you were coerced into signing a prenuptial agreement, you should consult with an experienced family lawyer.

Get the help you need from a lawyer you can trust in Lois Garber Schwartz Esq. Contact her offices today at 856-379-8989 or via her online contact form.