Where Should Custody and Parenting Issues Be Decided? 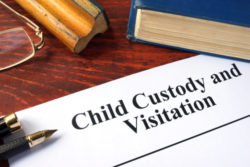 Questions about custody, support, and parenting time become even more complex when the parents live in separate states. Often, the first question to be answered in this situation is not “how do we resolve the issue in the best way for our children?”, but “where should this case be heard?”

A recent case in which both New Jersey and Massachusetts arose as potential locations faced this legal issue head-on. In B.G. v. L.H., the parties divorced in New Jersey. Their divorce agreement stated that any post-judgment issues would be brought to a New Jersey court as long as one parent stayed in New Jersey.

The father did stay in New Jersey and continued to have parenting time with the children there. The children, however, lived primarily with their mother in Massachusetts, and it was the Massachusetts Department of Children and Family that investigated certain concerns about the father’s parenting time, brought on by a teacher and a physician in that state.

The Massachusetts DCF conducted an investigation and concluded that the allegations were not supported or proven by evidence. However, the Mother then tried to institute proceedings regarding custody and parenting time in the Family Court for Massachusetts, instead of in New Jersey, as their divorce agreement had stated that it should.

And so the basic question arose:  Should the custody and parenting time issues be decided by a Massachusetts Court, or a New Jersey Court?

The trial court judge in New Jersey considered the terms of the agreement, but also conducted an analysis under the New Jersey Uniform Child Custody Jurisdiction and Enforcement Act (NJUCCJEA), examining whether it was still appropriate to keep the case in New Jersey. This is because only the original Court (in this case, New Jersey) can determine if it should relinquish jurisdiction, even where an agreement already exists. Therefore, the trial court judge asked three questions in its consideration of the original arrangement as it was outlined in their divorce agreement:

If you or someone you know are facing custody and parenting time issues, an experienced family law attorney can help you to choose the right place to bring your case and can build the evidence and compelling arguments you need to advocate for your needs and those of your children. To learn more, contact attorney Lois Garber Schwartz today.